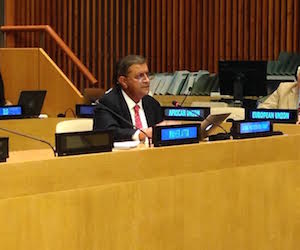 New York, May 28, 2015: The United Nations’ Economic and Social Council hosted its annual Partnerships Forum on Thursday, in order to discuss the role of partnerships in achieving the Post-2015 Development Agenda.

Following Council President Martin Sajdik’s opening words, Former President Bill Clinton began the day-long event in the ECOSOC Chamber.  President Clinton spoke about the impact that partnerships have around the world, especially when dealing with the recent ebola outbreak.  Throughout the event, panelists, including Mr. Amir Dossal of the Global Partnerships Forum, spoke about what must be done to achieve the Sustainable Development Goals.

The first half of the day highlighted how partnerships can help strengthen health systems, while the second half focused on the realities and obstacles of achieving SDGs for 2015.

The speakers each offered their unique perspectives on topics and provided suggestions to help achieve the SDGs.  Professor Rolf-Dieter Heuer, noted that collaboration and competition will only push forward at the pace at which research and education are obtained.  He believes that mutual understanding and partnerships among the private sector, public sector, political realm, and are key to moving forward.

The Global Partnerships Forum concluded the day by hosting a reception in the Dag Hammarskjöld Library Penthouse of the UN.