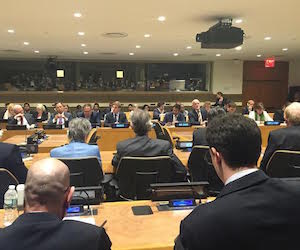 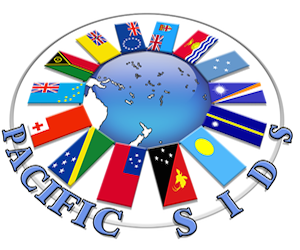 The Global Partnerships Forum was honoured to be part of this important dialogue, which was moderated by its Chairman, Mr. Amir Dossal.

Climate change poses a very pressing challenge for the global community; those in the Pacific region are facing challenges that threaten the survival of their communities, nations, peoples, and cultures. This unique event focused on discussing the potential development of innovative partnerships and alliances in order to build resilience for those facing the monumental challenges that emerge from the impact of climate change, especially for those living in the Pacific.

His Excellency, Mr. Anote Tong, President of Kiribati gave the opening remarks and emphasized a central message: “Climate change is a real challenge I think for all of us but in varying degrees. Some of us are having to deal with it today, some of us maybe believe they will never be affected, and we know there are those countries that believe they won’t be affected but I guarantee you, you will be, we’ll all be affected in time in one way or another.”

Ms. Mary Robinson read a message on behalf of Secretary General Ban Ki-moon, which highlighted that “there are climate solutions with a demonstrated record of success, but they need to be scaled up to tackle the full dimensions of this grave challenge. These solutions are feasible, affordable and can bring economic opportunity that supports our sustainable development goals. Low-carbon, climate-resilient development can create decent jobs, support livelihoods, expand equality and access to sustainable energy, build more resilient cities and enhance the health of both people and the planet.”

“As we continue on the road to Paris, I will work with leaders to develop a politically credible pathway to the $100 US Dollar billion per year commitment by 2020 that was made in Copenhagen, so that we can turn the partnerships you are talking about today into realities on the ground. I am counting on you to continue to provide leadership in the lead-up to Paris. Now more than ever, we need your voice and your example.”

President Robinson stressed that “Working together we are capable of incredible feats and we need to prioritize those who are most vulnerable and least responsible because that is the justice, that is the moral challenge facing us.”

Minister Tony deBrum stated “we have to convince Governments, regions, we have to convince the United Nations and its agencies that this is a lot more urgent than all this talk that we have, and what discussions that we have on these meetings might mean to many people. Some projects can be funded now, if we can just get the cooperation of the sources to marry up with the need. That’s the sort of thing we think partnerships can be useful.”

Her Excellency Ms. Isabella Lövin, Minister for International Development Cooperation for Sweden remarked that “we understand that now this is something that can’t be postponed; this is not a problem that may occur in the future, it’s happening really right now.”

Mr. Adnan Amin, Director General of IRENA, proposed “If islands were to become100% renewables by tomorrow, it won’t make a dent in global conditions at all, but it will improve the lives of the people.  It will desalinate water for drinking and for agriculture, it will give energy security to the people, it will help the hospitals have available lighting, the schools to be lighted, the industries to run, and I think it’s a moral imperative for us to do it.”

Ambassador Sareer of the Maldives stated that “as we approach the Paris Conference we have to walk towards this particular goal of coming up with a strong deal, whether the country is small or big, which would be the promise, that this particular international UN body should leave no one behind.” Ambassador Sareer advocated, “If we all join our hands together, we shall succeed.”

Ambassador van Oosterom from the Netherlands passionately supported the challenges faced by the PSIDS community.  He commented that the Dutch approach when it comes to protecting a country is through partnerships, and that they work very intensely with the government, knowledge institutions, and the private sector - “there’s a range of technology available, not only internally but also externally.”

Mr. Carl Linaburg stated, “Sovereign wealth funds aren’t limited to their own internal group. They participate on globally focused platforms, intermixed with other types of institutional investors, whether that be public pension funds, foundations and endowments, family offices, or even other types of government authorities that may be interested in putting together their own funds.” Mr. Linaburg proceeded by stating “it may actually be the right choice in financial terms to consider doing the right thing for the environment at the same time.”

In her remarks, Ms. Ann Korando pointed out “we cannot meaningfully speak, have sustainable development goals, and the future we want without an active engagement with the international community, especially the youth.”

Ambassador Sergeyev from the Ukraine provided thoughtful remarks on climate and security, by stating “…we are one people, one nation, one country. Climate change will divide us. It’s not about the climate; it is about territorial integrity. States are losing their lands, and now my position on this is that it should be in the Security Council agenda.  It is about the people who will be forced to move somewhere. Climate change is a weapon of mass destruction and SIDS nations are on the front line of the undeclared war. They need our immediate help now.”

Dr. Judy Kuriansky, Chair of the Psychology Coalition at the United Nations, strongly endorsed the mission of the Pacific Islands to create sustainable livelihoods and a culture of resilience. She provided several thoughtful suggestions on partnerships including engaging young people, and offered to follow-up though concrete actions.