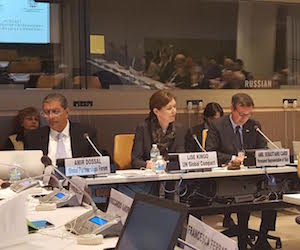 The  Permanent Mission of Italy to the United Nations hosted a special event about fighting climate change and shared a number of technologies from Italy.  The conference brought together members of the public and private sectors and involved the United Nations.  GPF President Amir Dossal moderated the panel.

Italy, among other coastal countries, has been highly impacted by climate change and rising sea levels, which affect Italy's marine ecosystem and ultimately its economy.  In order to combat the detrimental effects of climate change, The Permanent Mission of Italy to the UN developed technologies to protect coastlines from rising sea levels, use satellite images to track and monitor the impact of climate change, protect and monitor marine areas through the use of robotic fish schools, produce clean, renewable energy, and to monitor sea levels to prevent flooding.

The panel consisted of an outstanding group of specialists:

By sharing this information, the Permanent Mission of Italy to the UN hopes to spread this type of technology throughout the world to strengthen the universal commitment to fight climate change.

For the statement by Ambassador Sebastiano Cardi, Permanent Representative of Italy to the United Nations, click here.