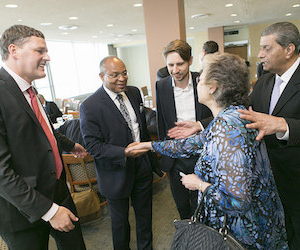 New York, 20 April 2015 - During a multilateral meeting between top United Nations officials at the UNHQ, it was declared that continued investment for malaria control and elimination targets are crucial for post-2015 goal platform.

The Global Partnerships Forum was pleased to participate in the event organized by the Roll Back Malaria Partnership. The event was host to a wide range of senior Organisation officials, diplomatic leaders and development experts who confirmed that 64 of 97 countries are now on track to meet crucial targets of Goal 6 of the Millennium Development Goals.

One of the most striking facts that came from the luncheon is the estimated $100 billion price tag required to eliminate the mosquito-borne disease by 2030. But despite this enormous sum, the Roll Back Malaria Partnership noted significant return on investment; with the fact that about 12 million lives could potentially be saved. Nearly 3 billion cases globally could be averted and a gain of $270 billion if the disease is eradicated in sub-Saharan Africa alone.

“A new generation now has the chance to grow up and contribute to their societies thanks to the work carried out by the malaria community,” Jan Eliasson, Deputy Secretary-General of the United Nations said in his remarks to the event.

“Fighting malaria is indeed one of the most cost-effective public health investments of our time. We cannot afford to stop investing now.”

Finally, the Global Partnerships Forum would like to personally thank the Roll Back Malaria Partnership for all the wonderful work they are doing in their quest to eradicate Malaria from the world.