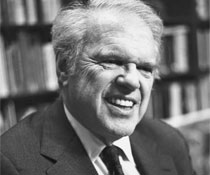 Mr. Finn has had an outstanding career spanning more than fifty years as a key executive in the field of public rela¬tions and as a widely published author. As co-founder and chairman of Ruder.Finn, Inc., one of the largest independent public relations firms in the world, he has been a leader in exploring the ethical and philosophical dimen¬sions of public relations as well as in creating innovative approaches that have enhanced its effectiveness and broadened its contributions. He is also an accomplished photographer of sculpture, a painter and a writer on art, with more than 100 books to his credit.

Clients of Ruder.Finn have included many Fortune 500 corpora¬tions as well as privately-held companies, trade associa¬tions, foreign governments and agencies, colleges and universities and not-for-profit organizations.

Mr. Finn has played a major role in the work the firm has done for international clients in France, Greece, Japan, Israel, Italy, New Zealand, Sweden, Switzerland, the United Kingdom, and other countries. He has been an advisor to the World Bank, and in the United States has been involved in programs for the White House, the United Nations and various government agencies including the Federal Reserve Board. He has written a periodic column for Roll Call, the newspaper of the Congress, and articles by him have been pub¬lished in Forbes, Fortune, Harper’s, the Saturday Review, the Harvard Business Review, the California Business Review, Across the Board, Management Review, and Reader's Digest. He produced a series of public service ads on “The Art of Leadership” for Forbes magazine.

His book, Public Relations and Management, published by Reinhold, has been translated into several languages including Japanese, Spanish and Arabic. The

Corporate Oligarch, pub¬lished by Simon & Schuster, has also been translated into Japanese.

An advisor to clients on major public issues, he has counseled senior executives and government officials on matters involving the environment, education, the arts, public health, nutrition, minorities and the economy. He has lec¬tured and presented papers on public relations and communica¬tions at the American Assembly; the Conference of Science, Philosophy and Religion; Columbia University Graduate School of Business; Drexel University; International Association of Business Communicators; American Library Association; the Atomic Industrial Forum. For many years he was adjunct pro¬fessor of public relations at New York University, and he taught a course, "The CEO as a Whole Man," at the New School for Social Research.

Books on art that Mr. Finn has written include How to Visit a Museum, How to Look at Sculpture, How to Look at Photographs and How to Look at Everything (all published by Harry N. Abrams, Inc.). His photographic books have been devoted to different periods of history, including ancient Egypt, clas¬sical Greece, and western art from the 12th-20th centuries. Mr. Finn's photographs and paint¬ings have been shown in several one-man exhibitions at the Yale Center for British Art in New Haven, the Musee de Cluny and l 'Orangerie in Paris, the American Cultural Center in Madrid, the Art Gallery of Toronto, the Metropolitan Museum of Art in New York, and in galleries in Chicago, Los Angeles, London, Paris and New York.

Mr. Finn was formerly chairman of the board of Cedar Crest College and is Director Emeritus of the Business Committee for the Arts. He currently serves on the boards of the Academy of American Poets; The New Hope Foundation; and MUSE Film and Television. He is a former editor-in-chief of Sculpture Review magazine.

Mr. Finn is a Fellow of the American Academy of Arts and Sciences, and served during the Clinton Administration as a member of the Advisory Council for the National Endowment for the Humanities.

A graduate of The College of the City of New York, Mr. Finn and his wife live in New Rochelle, New York, and have four children, ten grandchildren, and three great grandchildren.