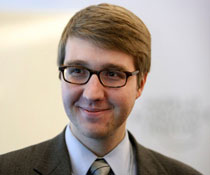 Howard W. Buffett is a lecturer in international and public affairs at Columbia University, where he teaches graduate courses on public sector innovation, partnerships, and social value investing. He also serves on the Management Advisory Board for Columbia’s Earth Institute.  Mr. Buffett serves as Chair of the Advisory Board of the Global Partnerships Forum.

Before joining Columbia's faculty, Mr. Buffett was the executive director of the Howard G. Buffett Foundation, which distributes over $150 million annually to strengthen food security for vulnerable populations throughout the world. While at the foundation, Mr. Buffett coauthored the New York Times bestselling book 40 Chances: Finding Hope in a Hungry World, which examines global agriculture and food systems challenges, drawing from his and his father’s experiences traveling in more than seventy countries across six continents. He currently serves as a trustee of the foundation.

Mr. Buffett previously served in the U.S. Department of Defense, overseeing agriculture-based economic stabilization and redevelopment programs in Iraq and Afghanistan. For his work, he received the highest-ranking civilian honor presented by the Joint Chiefs of Staff requiring the request and approval of a Combatant Commander. Prior to the Defense Department, Mr. Buffett was a policy advisor for the White House Domestic Policy Council. He coauthored the President’s cross-sector partnerships strategy, and managed the White House Partnerships In Innovation Interagency Working Group across 14 departments and agencies.

Mr. Buffett earned his BA from Northwestern University and his MPA in Advanced Management and Finance from Columbia University. He is a Term Member of the Council on Foreign Relations, and he has served in advisory capacities for the Aspen Institute, the Chicago Council on Global Affairs, and the United Nations Office for Partnerships. He also sits on a number of corporate advisory boards, including Toyota Motor North America Inc.