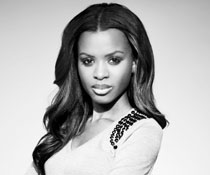 June Sarpong has had a 12-year career which began at MTV UK and has already seen her become one of the most recognizable faces of British Television, as well as being one of the UK’s most intelligent and dynamic young hosts. She is a media phenomenon and is the only presenter of her generation that is equally comfortable interviewing politicians, celebrities and the public.

A popular and well loved personality within the world of TV, she was voted as the number one panelist young people wanted to see on the legendary British political discussion show Question Time. She has also interviewed and introduced some of the world’s biggest names including: Nelson Mandela, HRH Prince of Wales, Bill Clinton, Al Gore, Bono, George Clooney and 50 Cent.

Last year she launched Politics in the City.com, an innovative women’s lifestyle and news internet site.

June is an ambassador for the Prince’s Trust and also campaigns for the Make Poverty History movement – she was awarded an MBE (Member of the British Empire) on the Queens’s 2007 new year’s honours list – for servicing to broadcasting and charity, making her along with Princess Anne’s daughter Zarah Philipps one of the youngest people to receive an MBE that year.

Alongside Will Smith she also hosted Nelson Mandela’s 90th birthday celebrations in London’s Hyde Park. She currently resides in L.A. and is producing and hosting Conspiracy Theory with Jessie Ventura for True TV.