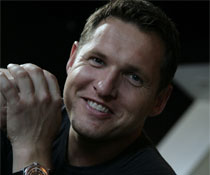 Inge Solheim is 39 years old and of Norwegian origin. Hailing from Otta, a small village nestled within a challenging landscape of towering peaks and icy glaciers, the spirit of adventure is truly in his blood. After years of running a Pizza restaurant from the age of 15, and later military service, Inge worked as a stockbroker. His strong spirit led him to leave behind city life however and go back to his adventure roots. With over 15 years experience guiding, exploring and consulting in the most extreme environments on the planet, Inge is one of the most noted and respected individuals in his field, with a host of credentials and achievements to his name. Inge’s current projects include: “Virgin Oceanic” with Richard Branson, plans for a record crossing of Rub al Khali desert, several TV productions and ‘Walking With The Wounded’: A much publicized expedition to the North Pole with permanently injured soldiers. Here Inge had the responsibility of guiding 7 people including 4 amputees on a North Pole expedition. HRH Prince Harry joined them one week on the ice. Inge will be guiding the next WWTW expedition to the South Pole December 2013. Inge travels the world and spreads his life philosophy and good values through inspirational talks and coaching. He is one of the key advisers to the Global Partnerships Forum. His creative approaches to addressing social and economic problems is refreshing and helping build new forms of alliances and partnerships.