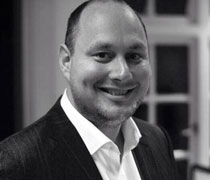 Marcus Chidgey is the CEO and founder of Captive Minds, a strategic communications agency based in London and New York.

After graduating from the University of Exeter, Marcus lived and taught English in Japan for a year on the JET Programme before returning to work for Apple in 2001 where he helped to launch the iPod and Mac OSX as a marketing assistant.

Inspired by his time at Apple, Marcus sought out other creative opportunities and became involved in successfully marketing a film which premiered at BAFTA and the Cannes Film Festival. With demand from potential clients, Marcus teamed up with business partner Alex Rayner and established Captive Minds in Battersea, London in July 2003.

A creative and an innovator, Marcus sets new standards in communication through unique content, high-profile ideas and pioneering digital platforms. He’s passionate about building the profile of inspirational people and brands, particularly when there’s an opportunity to have positive social impact.

Captive Minds is perhaps best known for helping to launch the Walking with the Wounded charity which saw Prince Harry take part in expeditions with wounded servicemen and women to the North Pole in 2011 and the South Pole in 2013. Captive Minds managed press, media partners, corporate sponsors and broadcasters as well as handling all branding, online and creative. In just over 3 years, over a billion people had watched or read about Walking with the Wounded in the international news media, 100 million people had watched the documentaries in over 25 countries, 25,000 people had bought the North Pole book and millions of pounds had been raised for charity.

Captive Minds’ success was repeated in 2014 with the Willis Resilience Expedition, created on behalf of the Willis Group, which saw 19-Year Old Explorer Parker Liautaud honoured as a ‘Champion of Change’ by The White House. Not only did the expedition set two world records, but it was the first to be broadcast daily online and on network news live from Antarctica. Over 600 million people were reached with broadcasts worldwide on stations such as NBC, CNBC, BBC, ITV, Sky and CCTV. Captive Minds received the Public Relations Society of America’s Silver Anvil Award for the campaign.

Led by Marcus, Captive Minds is developing content opportunities for brands and corporations in the areas of Adventure, Style, Sport and Social Impact. The agency possesses an eminent board and works with a diverse range of clients - from Glenfiddich, Toshiba, Cirque du Soleil and Virgin through to national and local government. Recently, Marcus helped to establish Captive Health, a company revolutionising patient engagement, performance and feedback for NHS Trusts in the UK.

Alongside his role as CEO at Captive Minds, Marcus is Chair of Trustees for Commando 999, a Royal Marines charity. He also sits on the Advisory Board of the International Academic Forum.

Marcus is married and lives in London.