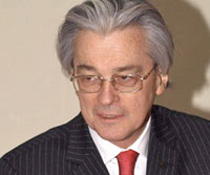 Ambassador Francis M. O’Donnell (ret.), is a Life Member of the Institute of International and European Affairs, Director of Clans of Ireland (both under the patronage of the President of Ireland). He is also a Senior Advisor for Nonviolent Peaceforce. He also holds other directorships.

Francis Martin O'Donnell served as Ambassador Extraordinary and Plenipotentiary of the Sovereign Military Order of Malta to the Slovak Republic from December 2009 to March 2013. He previously served as a United Nations official for 32 years, most recently as the Resident Coordinator of the United Nations system in Ukraine, from September 2004 until March 2009, and previously in the same capacity in Serbia-Montenegro.

Since 1976, when he started as a United Nations Volunteer in Sudan, he has also served the UN in Lesotho, Mauritania, Niger, Switzerland, Turkey, the United States of America, and recently in Serbia & Montenegro. He also undertook missions in over 40 other countries in Africa, Asia, the Middle East, Central and Eastern Europe, North America, and the Caribbean.

At the end of the Cold War, he was requested in late 1991 to launch a rapid response capability for deploying UN Volunteers (UNV) to UN emergency operations worldwide. He overhauled recruitment methods, and oversaw the rapid deployment of thousands of UN volunteers to crisis zones, where they became the front-line link between relief and aid delivery agencies such as UNICEF, UNHCR, WFP, UNDP, and WHO and suffering war victims, refugees and internal displacees. The effort saved lives during the years 1992–1994 in Afghanistan, Angola, Bosnia, Cambodia, Ethiopia, Kenya, Liberia, Rwanda, Somalia, Sudan and other war-torn countries during the inter-ethnic wars that succeeded the Cold War's proxy conflicts. True life stories from the field featured in Volunteers Against Conflict, a book praised by former Presidents Nelson Mandela, Mary Robinson, Jimmy Carter, and Nobel Peace Laureate Rigoberta Menchu Tum. This book was written by volunteers recruited under O'Donnell's leadership of the Humanitarian Relief Unit of UNV.

Later based in Turkey, he helped assure the humanitarian corridor through Turkey into northern Iraq after the first Gulf War from 1994–1996, and coordinated earthquake relief in Turkey itself. Subsequently he held a senior emergency management role in UNDP headquarters in New York, and later led a systemic governance team for crisis countries, developing a new policy approach to tackle root causes for preventing crisis in vulnerable countries.

On October 13, 2000, O'Donnell arrived in Belgrade in the immediate aftermath of the overthrow of Slobodan Miloševi?. There, as UNDP representative, he supported the new democratic forces in bringing stability to the remnant of the former Yugoslavia (Serbia and Montenegro), preventing nascent conflict with marginalised ethnic Albanians in the Preševo Valley of southern Serbia, launching reintegration programmes, promoting human rights, and supporting reform of governance institutions, and supporting civil society. In 2002, he was appointed by the UN Secretary-General Kofi Annan as Resident Coordinator of the UN system, and appointed by UNDP Administrator Mark Malloch Brown as Resident Representative of the UNDP in Yugoslavia/Serbia-Montenegro, and later again in Ukraine in October 2004, just before the so-called Orange Revolution. Following the Belgrade Agreement (2002) brokered by Javier Solana that restructured the remnant federal republic of Yugoslavia (Serbia and Montenegro) into a looser state union of Serbia and Montenegro, O’Donnell held consultations with the president of the federal government of Yugoslavia and leaders of the republics of Serbia and Montenegro, and organised a Strategic Roundtable on Governance Transition in Belgrade, featuring most of the signatories of the Belgrade Agreement, international experts on transition, and a large representation of government officials and the international community. It was the first major public forum bringing together important political players to air crucial constitutional issues.

He presented his credentials to the President of Ukraine on 16 November 2004. O'Donnell called for greater awareness of the Holocaust and active tolerance and decried discrimination against Jews, Muslims, migrants and minorities in many countries. He was also instrumental in tackling racism and xenophobia in Ukraine, by taking the leadership in organizing regular consultations and meetings with the representatives of diplomatic missions and international organizations and jointly bringing this issue to the attention of Government. As a result of concerted efforts, the Government stepped up its response to this challenge; it adopted an Action Plan on Counteraction to Racism; and the Security Service of Ukraine (SBU) established a special unit to counteract xenophobia and intolerance. Policy advice was provided and best practices from European countries was shared with Government. There was a wide-scale information campaign, including broadcasting of public service announcements.

O’Donnell guided expansion activities of the Order of Malta country-wide in favour of children in orphanages, single and abused mothers, homeless people and other people living below the poverty line, and it also supports the modernization of health-care facilities, as well as projects focused on the integration of Roma children.

The initiative to create an Irish-Arab Society was proposed by O’Donnell in November 1968, and taken up by a group of Irish and Arab friends. It was the principal advocate of the Palestinian cause in Ireland during the 1970s and the 1980s. It played a key advisory and facilitative role in promoting Irish-Arab trade and cultural links, and with its support diplomatic relations were established with 12 states in the Middle East and North Africa between 1974 and 1976.

In the early 1990s, O'Donnell was actively involved in promoting global peace services and inter-faith dialogue, with World Peacemakers and the United States Agency for International Development, Global Alliance of Peace Services, the Life and Peace Institute, the Swedish Christian Council, Pax Christi, International Alert, and others.

O'Donnell is a board member of Clans of Ireland, the independent permanent authority established in 1989 to authenticate and register Irish Clans and historical families, under the patronage of the President of Ireland, and also serves on the Council of its Order of Merit.

He was schooled in Jerusalem (Collège des Frères) and Dublin (St. Vincent's C.B.S., Glasnevin). An honours graduate in Economics and Philosophy from the National University of Ireland at University College Dublin, O'Donnell read International Law and Diplomacy at postgraduate level in Geneva, and qualified in Disaster Management at the University of Wisconsin–Madison.

Slovakia: Ambassador O’Donnell was awarded the Golden Medal by Miroslav Laj?ák, Deputy Prime Minister and Minister of Foreign and European Affairs of the Slovak Republic on 1 March 2013, in recognition of enhanced bilateral relations during the period 2009-2013, and expanded activities in social work, palliative care, disability and health, and a new programme for integration of Roma children into the education system.

Ukraine: On his departure from Ukraine, the Parliamentary Ombudsman of Ukraine, Ms. Nina Karpachova also bestowed the Ombudsman’s Medal of Honour on O’Donnell for his defense of human rights in that country.

Holy See: He was decreed into the Pontifical Equestrian Order of St. Gregory the Great, by virtue of which Pope Benedict XVI conferred on him the dignity of papal Knight Commander with Silver Star, a dignity assumed upon his retirement from the UN.

Holy See: He was invested into the Equestrian Order of the Holy Sepulchre of Jerusalem, Irish Lieutenancy, by the Latin Patriarch of Jerusalem.

Royal House of Bourbon-Two Sicilies: He is also a Knight Commander of the Sacred Military Constantinian Order of Saint George.

Sovereign Military Order of Malta: O'Donnell is also a Knight of Malta (member of the Sovereign Military and Hospitaller Order of Saint John of Jerusalem, of Rhodes, and of Malta), and was accredited as the Order's Ambassador Extraordinary and Plenipotentiary to the Slovak Republic 2009-2013.