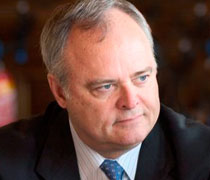 Bruce has been a speaker at World Economic Forum Regional Summits in Russia and Kazakhstan. He was a guest on NBC’s Today Show, and has been a panelist or participant at the UBS Philanthropy Forum in Geneva, Switzerland, the Forbes CEO Forum in Singapore, the Forbes CEO Middle East Forum in Doha, Qatar, Clinton Global Initiative in Hong Kong, the annual Milken Global Conference in Los Angeles and the World Innovation Summit for Education in Doha, Qatar. He has traveled to over 40 countries on international business and traveled extensively throughout Asia, Brazil and much of the Middle East.
As Executive Vice President for Enactus (formerly known as SIFE) from 1998 through 2013, Bruce was responsible for launching and building the organization’s international operation in 27 countries and helped to triple the number of universities engaged worldwide to over 1,600. He also raised funds from the corporate and government sectors for the Enactus World Headquarters and their affiliated countries and coordinated the benefits and relationships for several significant partners including KPMG, Unilever, AIG, Coca-Cola and HSBC. For his leadership worldwide, he was awarded the Global Champion of Enactus, the highest award given by the organization in 2013. He served on numerous Enactus boards including those located in Australia, Canada, China and United Kingdom. He served as the interim President for Enactus Brazil during a leadership period in 2011 and 2012.

Bruce served for fifteen years as CEO of various Junior Achievement area offices in the United States including JA’s largest operation in Los Angeles, California. During his tenure with JA, he served as the organization’s National Program Director at their headquarters in Stamford, Connecticut. He has also been the President of the Greater Los Angeles Zoo Association, one of the world’s largest zoological institutions. Several capital campaigns were successfully completed during his tenure as President and the revenue and attendance records achieved during his four years with the association continue to stand today as the highest in the zoo’s 40+ year history.

Bruce is a graduate from the University of Arizona and served in the United States Navy where he received numerous medals and awards including the Navy Achievement Medal.