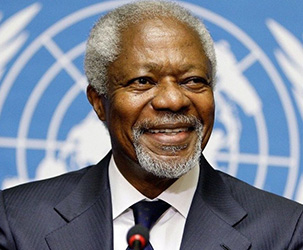 As the world mourns the untimely passing of one of the greatest leaders of our time, we reflect on how much he did for humanity.

As the first Secretary-General elected from the ranks of the United Nations, Kofi Annan brought a sense of pride and belonging to the thousands of staffers and millions of others around the globe.  I was honoured to serve under him, not only when he was Secretary-General but also when he was the first head of the UN’s Department for Peacekeeping Operations.

Mr. Annan’s interpretation of the UN Charter was not simply to represent governments, but to ensure inclusion of every single person around the world.  He was the voice for the voiceless – his lifelong service was built around the mantra of doing good for humanity, through the lens of peace, security and human rights for all.  He was a true visionary with a deep commitment to addressing imbalances in our society.

A kind and gentle man, and very soft-spoken – whenever he spoke, there was pin-drop silence in the room – Kofi Annan was a charismatic leader and gained the respect of his peers.  Presidents and Prime Ministers relied on him as the moral compass.  He was the listening post for one and all, from heads of state and government to juniors across the globe, knowing that the United Nations could only do so much!  Mr. Annan knew full well that his job was to administer and implement the wishes of Member States, although he was not averse to providing them ‘guidance.’

Kofi Annan was a strong believer that the United Nations’ mission was to serve people around the world and encouraged closer cooperation with business and civil society (non-state actors) in order to accelerate economic and social progress.  His election to Office in January in 1997 came at a critical time when the UN was struggling with debt and introducing tough budget cuts.  Peacekeeping missions continued to challenge the international community, including the aftermaths of the Rwanda genocide, and the conflict in former Yugoslavia.

In September 1997, media mogul Ted Turner, came to Kofi Annan and offered $1 billion to support humanitarian causes – a real booster for the United Nations.  As a result of this historic gift, Mr. Annan opened the UN’s doors for more collaboration with private sector and civil society in order to have a multiplier effect.  That was the start of the UN’s partnership movement.  Today, his legacy remains stronger than ever, with the UN embracing the concept of working together for our common humanity, as a core operating principle.  You are the prime example of this!

The adoption of the Millennium Development Goals in September 2000 was one of the crowning glories for Kofi Annan.  Through his astute leadership, gentle persuasion, and elegant diplomacy, he encouraged all Member States to adopt the historic Millennium Declaration and acknowledge their collective responsibility to uphold the principles of human dignity, equality and equity, and their duty to all people in the world, especially the most vulnerable and particularly children.

The Sustainable Development Goals were built on his legacy – a legacy to leave no one behind!

Therefore, today’s Call to Action is VERY timely – Together We Can!