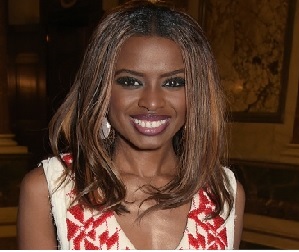 British television phenomenon and GPF Ambassador, June Sarpong hosted the Women: Inspiration & Enterprise (WIE) Awards honoring “trailblazing” women. The WIE works to celebrate the energy and talent found in women all over the world in order to provide a platform for the women leaders of this generation to inspire and empower the next.

Leading women from diverse fields such as fashion, politics, social enterprises, and television gathered at London’s Goldsmith’s Hall in celebration of the distinguished WIE Awards. Among the honored trailblazing women were the Executive Chairman & founder of the Net-A-Porter and Chairman of the British Fashion Council, Natalie Massenet, who was honoured with the Enterprise award. The Exemplar award was presented to Kenyan-born model Malaika Firth, and actress Joanna Lumley was bestowed the Campaign award in recognition of her work supporting the Gurkha Justice Campaign, on behalf of the Nepali soldiers who served in the British army but are currently based in the United Kingdom.

At the star-studded event, students from the London College of Fashion and Parson’s The New School for Design, in partnership with artisans from Ethiopia, India, Mongolia, and Papua New Guinea presented their designs in a runway show titled the “Legacy Collection.” This same collection was shown at a runway show at the United Nations Headquarters in New York in September. There, a panel of judges chose three winning designers from the show, whose collections will be shown in the windows of Liberty in London in July.