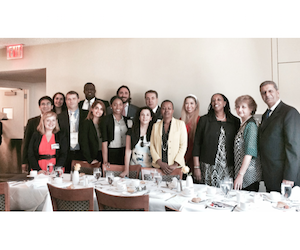 New York, 24 June, 2015 – The GPF hosted a luncheon honoring Ms. Mbaranga Gasarabwe,  who was recently appointed Deputy Special Representative of the United Nations Multidimensional Integrated Stabilization Mission in Mali (MINUSMA). MINUSMA strives to “support the political process and carry out a number of security-related stabilization tasks, with a focus on major population centres and lines of communication, protecting civilians, human rights monitoring, the creation of conditions for the provision of humanitarian assistance and the return of displaced persons, the extension of State authority and the preparation of free, inclusive and peaceful elections.”

Ms. Gasarabwe is a native of Rwanda. She previously held the position of Assistant Secretary-General for Safety and Security at the United Nations.  She has served as Resident Coordinator of Guinea, Djibouti, and Benin, in addition to several other countries, since 1998.