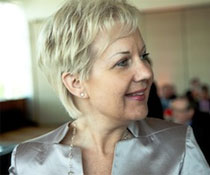 Suvi Lindén was Finland’s Minister of Communications in 2007-2011. She was previously Minister of Culture, 1999-2002. Ms Lindén is a member of the National Coalition Party and was a Member of Parliament 1995-2011

Ms Lindén holds positions of trust in a number of organisations. These include positions as Commissioner of the United Nations Broadband Commission for Digital Development, Member of the United Nations Advisory Board of the Digital Health Initiative, Chair of the Oulu Region Joint Authority for Education, Chair of the Finnish Cultural Institute for Benelux, Member of the Advisory Board of Walsh University Institute for the Study of the Intelligent Community and Member of the Oulu City Council to mention only her present duties.

The Intelligent Community Forum, a New York-based think tank named her as its “Visionary of the Year for 2011” for her commitment to ensuring affordable broadband access to every citizen in Finland.

Ms Lindén holds a Master of Science degree from the University of Oulu.