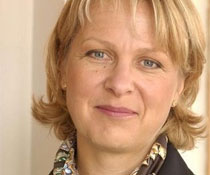 Katharina R. Vogeli, Consultant, Catalysts for Impact Based in the Geneva region in Switzerland, Katharina looks back to over 25 years of an international career in public sector and civil society organizations in Europe, Africa and the United States. She has extensive expert knowledge on Africa, with long-term assignments in several countries of the Great Lakes region.

She has an established reputation for her strategic leadership, the building and nurturing of networks and institutions, as well as the design and implementation of effective public diplomacy programs. For many years, her focus has been to build bridges and to foster dialogue on global issues amongst diverse opinion shapers and policy makers.

Above all, Katharina enjoys connecting people around common concerns and interests. She has thus been instrumental in building partnerships between a range of nongovernmental, inter-governmental and government stakeholders that led, inter alia, to the establishment of a Centre for Peace and Security Training in Addis Ababa, high-level training courses under the auspices of NATO in Afghanistan, and most recently, the launch of a cooperative movement in Eastern Burundi.

In 2010, Katharina decided to launch into a career as an independent consultant, advising leaders from civil society and governments, mostly on programs in or relating to Africa. Her focus is on strategy development and facilitation, strategic partnerships, as well as communication and fundraising strategies. By emphasizing these key elements to strategic management, Katharina helps her partners gain maximum impact with their programs and activities.

Her focus of the past year has been the facilitation and development of the long-term strategic planning and global communication of the Burundian NGO Maison Shalom. She is a key advisor of the internationally renowned and prize-winning Founder and President, Marguerite Barankitse.

As the Deputy Director responsible for strategic management at the Geneva Centre for Security Policy (GCSP) from 2007 to 2010, Katharina led a thorough strategic review and institutional reform process. On behalf of the Centre she established far-ranging partnerships with African civil society and inter-governmental institutions, and developed joint programs and activities with a wide range of government agencies in Asia, Africa and Europe, as well as with NATO and the United Nations.

In her previous position as the Executive Director of the Swiss Foundation for World Affairs at Johns Hopkins University’s School of Advanced International Studies (SAIS) in Washington, D.C. from 2002 to 2005, Katharina was known and respected for excellence and impartiality in fostering dialogue through high-quality conferences, seminars and round-tables on critical issues of global interest, including international humanitarian law and human rights, peace and security policy, and human development.

Prior to her appointment in Washington, DC, Katharina worked, inter alia, in human rights diplomacy and as a political analyst on Africa for the Swiss government. Her experience in Africa includes working as a human rights field officer for the United Nations in post-genocide Rwanda, as the country director of Search for Common Ground in Burundi and as an expert for IFES in the Democratic Republic of Congo. As the Deputy Personnel Director of the German development agency Christian Services International, she established productive partnerships with African churches, focusing on grass roots development initiatives. Earlier in her career, she held a number of administrative and management positions in the private sector in the USA and in Switzerland.

She was educated at the Johns Hopkins University Paul H. Nitze School of Advanced International Studies in Washington, DC where she obtained her MA in International Affairs (Africa/International Economics) and pursued doctoral studies (ABD) in Conflict Management, International Law, Comparative Politics and Africa. A Swiss national, Katharina is fluent in German, French and English.

Since 2003 she is a member of the Advisory Board of the Fondation pour l’Histoire des Suisses dans le Monde. She is the Co-Founder and President since 2001 of the Association Un avenir pour les enfants au Burundi, which represents the Burundian NGO Maison Shalom in Switzerland.