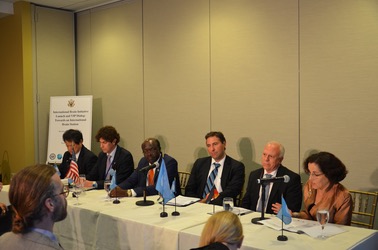 September 19, 2016: The U.S. Department of State, The Kavli Foundation, The Global Partnerships Forum, and the U.S. National Science Foundation hosted the launch of the International Brain Initiative, part of which is an International Brain Station, to enhance and facilitate global collaboration on fundamental brain science research.

The High-Level Dialogue at the United Nations, which took place at the opening of the 71st session of the UN General Assembly, brought together 35 global experts to establish brain science as a foreign policy priority and to work toward the launch of an International Brain Station. The event consisted of two fireside chats with representatives from the U.S., Japan, Germany, Argentina and the United Nations Conference on Trade and Development, as well as Nobel Laureate scientists, private sector, foundations and major funders of brain science research.

Neuroscience is undergoing a revolution due to technological developments in genetics, biology, engineering and computing that are providing researchers with increasingly powerful tools to understand the brain. With its genesis in the scientific community, the Brain Station will be a community-based mechanism for coordinating data and information from brain science projects around the world.  The aim is to catalyze breakthroughs in understanding the complexities of the human brain, which will be an important tool for economic prosperity and improved quality of life for all.

The Global Partnerships Forum was privileged to serve as a co-host for this important initiative.  For the official press release from the Office of the Spokesperson, US Department of State, please click here.

The Dialog brought together global leaders from across sectors:

For more information on basic brain science research from our scientific partners:

About the National Science Foundation: The National Science Foundation (NSF) is an independent federal agency created by Congress in 1950 "to promote the progress of science; to advance the national health, prosperity, and welfare; to secure the national defense..." NSF fulfills its mission chiefly by issuing limited-term grants -- currently about 12,000 new awards per year, with an average duration of three years -- to fund specific research proposals that have been judged the most promising by a rigorous and objective merit-review system. Most of these awards go to individuals or small groups of investigators.

About the Kavli Foundation: The Kavli Foundation was established in December 2000 by its founder and benefactor, Fred Kavli, a prominent California business leader and noted philanthropist whose foundation is currently actively involved in establishing major research institutes at leading universities and institutions in the United States, Europe and Asia. The Foundation is dedicated to the goals of advancing science for the benefit of humanity and promoting increased public understanding and support for scientists and their work.  Its mission is implemented through an international program of research institutes, professorships, and symposia in the fields of astrophysics, nanoscience, neuroscience, and theoretical physics as well as prizes in the fields of astrophysics, nanoscience, and neuroscience.

About the Global Partnerships Forum: The Global Partnerships Forum is a unique not-for-profit knowledge platform, providing changemakers with the tools to build innovative partnerships.  It convenes thought leaders and practitioners from across sectors to address challenges around the world and foster economic growth.  Working to support the goals and objectives of the United Nations, the GPF aspires to move the needle from aid to investment—using the power of partnerships—to accelerate achievement of the 2030 Agenda for Sustainable Development.

Acknowledgements: This VIP Dialog and the Launch event was developed under the leadership of Genya V. Dana, PhD, Senior Science Policy Officer, Office of the Science and Technology Adviser to the Secretary of State; Chris Martin, PhD, Science Program Officer, The Kavli Foundation; and Franklin A. Carrero-Martinez, PhD, Program Director, Office of International Science and Engineering, Office of the Director, National Science Foundation.

To view photos of the event, please visit our Facebook page: https://www.facebook.com/PartnershipsOrg