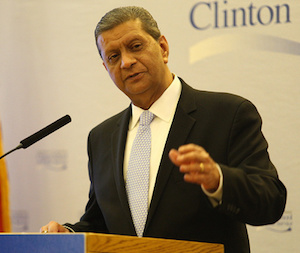 Chairman of the Global Partnerships Forum was honoured to be featured as a William J. Clinton Distinguished Lecturer

Little Rock, 31 March 2015 - Amir Dossal, Chairman of the Global Partnerships Forum, was recently invited to speak at the University of Arkansas Clinton School of Public Service as a William J. Clinton Distinguished Lecturer. He was asked to pull from his vast experience in facilitating public and private partnerships to discuss the benefits of productive collaboration between state and non-state entities.

The University of Arkansas Clinton School of Public Service speaker series is a distinguished event for many lecturers. It has held host to Nobel Laureates Al Gore and Leymah Gbowee, Senator John McCain, USAID Administrator Raj Shah, co-founder of Ben and Jerry’s Ben Cohen, journalist Sanjay Gupta, astronaut Buzz Aldrin, among others. The Clinton School is also the first accredited institution to offer a Master of Public Service degree in the country. It was created with the vision of President Bill Clinton, who imagined a school that could help students who wanted to make a real difference through public service.

“Companies of course understand that many of the drivers for long-term profitability and success — such as access to energy, good governance, and sustainable economic development — overlap with the UN’s priorities, from the 8 Millennium Development Goals (MDGs) and soon to be approved, 17 SDGs. Everyone has a role to play.” Mr. Dossal proclaimed in his speech.

“The betterment of our common humanity can only be achieved through strong collaboration.

Imagine the power and potential behind effective public-private partnerships…”

Mr. Amir Dossal was honoured to be selected to be part of such a prestigious lecture series.  He would like to especially thank Nikolai DiPippa, Public Programs Director at the Clinton School of Public Service for who expertly facilitated this opportunity.