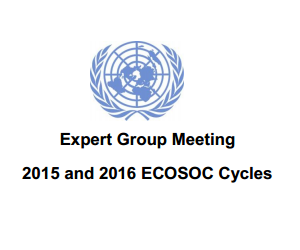 Mr. Dossal contributed to the dialogue as a panellist at the Roundtable on "Multi- stakeholder Partnerships for Delivering on the Post-2015 Development Agenda." During his presentation and commentary, Mr. Dossal stressed the importance of innovative multi-stakeholder partnerships, citing the recently released Synthesis Report of the Secretary-General On the Post-2015 Agenda, which lists partnerships as one of the six essential elements for delivering the SDGs.

The interactive discussion was moderated by His Excellency Mr. Oh Joon, ECOSOC Vice President and Permanent Representative of South Korea.  Ambassador Oh Joon set the tone for a productive discussion and encouraged the panellists to share their perspectives on how to best overcome policy silos, with the hope of creating a more dynamic, participatory and efficient partnership culture, at all levels and between all partners, to help attain the post-2015 agenda.

The discussion featured presentations regarding different types and levels of partnerships, examples of successful partnerships and lessons learned, the critical need for measurable targets, transparency and accountability, as well as varying opinions on the efficacy and efficiency of global partnerships for development. Other panellists included:

His Excellency Mr. Lazarous Kapambwe, Advisor to Chairperson of the African Union, stressed that greater success in the post-2015 development agenda and the partnerships created as a result, will be achieved if we, as global citizens, address the problems instead of the symptoms.  He commented, "We suffer the psychosis that funding is the magic that cures aliments. More often than not, money is the magic bullet that destroys organs. The success of the post-2015 agenda will depend on us changing our mindset."

Mr. Alessandro Motter, Senior Advisor, Inter-Parliamentary Union believes that the role of government has been diminished over the years, while the power of the corporate and private sector has increased. Mr. Motter argued that this imbalance of power has produced adverse outcomes, and strongly advised against private sector partnerships in the post-2015 agenda.

The Global Partnerships Forum was honoured to have been invited to contribute to this important dialogue and commends the continued efforts and leadership role in the post-2015 process of UN Economic and Security Council (ECOSOC) and UN Department of Economic and Social Affairs (DESA), including Mr. Thomas Gass, Assistant Secretary-General for Policy Coordination and Inter-Agency Affairs.