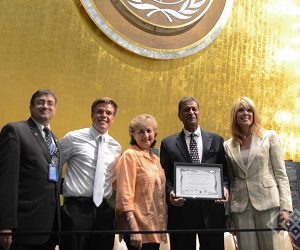 Honoring the Past, Recognizing the Present, and Imagining the Future

The UN's 70th anniversary is a very special time to gather NGOs, celebrate their successes and leaders over many years, focus on the post-2015 agenda of the SDGs, and cast an eye to the future with a special highlight on Youth in NGOs.

Brought together by the esteemed cooperation among certain Member States and civil society, the 2015 NGO Conference at the United Nations celebrated the 70th Anniversary of the United Nations with the theme: Honoring the Past, Recognizing the Present, and Imagining the Future.

The Conference brought together the vast diversity of international civil society constituencies, NGO stakeholders, and campaigns to the United Nations.  The workshops and exhibits were a chance for NGOs from around the world to share with others their mission and vision.

The 2015 NGO Conference at the United Nations was created and produced by several Permanent Missions to the United Nations, who worked alongside several NGOs and other UN agencies, among others, to create a celebratory event during the 70th anniversary of the Signing of the UN Charter.

Friendship Ambassadors Foundation, Inc., a long standing NGO at the UN, functioned as the conference planner and events manager. The Foundation was proud to offer its services to this conference.

GPF Chairman, Amir Dossal, was thrilled to moderate the Roundtable on ‘Helping Each Other Help the World’.  The participants discussed the importance of partnerships and the critical role they will play in achieving SDGs.  Mr. Dossal was also honoured to receive an award for his many years of public service and partnership building.  The award was presented by Ms. Laura Turner Seydel, Chairperson of the Captain Planet Foundation.  Laura Turner Seydel is an international environmental advocate and eco-living expert dedicated to creating a healthy and sustainable future for our children.