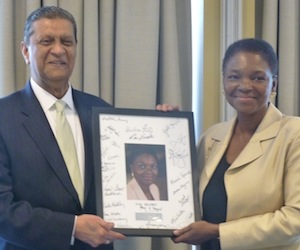 The distinguished guests provided some insights into their connection to the important work of Baroness Amos and the Office for the Coordination of Humanitarian Affairs (OCHA).

Mr. Amir Dossal spoke of the great impact that Baroness Amos has had throughout the world.  He noted her ability to breakdown barriers, as she was the first woman of colour to serve in the British Cabinet, and detailed how Baroness Amos has been a force in addressing Human Rights issues for more than two decades.  Mr. Dossal summarized the Baroness’s many contributions to humanity and on behalf of the GPF and guests, a special memento was presented to Baroness Amos, as The World’s Savior.

Baroness Amos thanked both Mr. Amir Dossal and Mrs. Tas Dossal for organizing the event and took the opportunity to enlighten guests on why the work of OCHA is so important and necessary.  She spoke of the dire need that many people around the world are experiencing, citing a specific example of the 2 million people who have been displaced from Iraq since just the beginning of the year.  She urged those in attendance to join her in her commitment to helping people who have experienced such crisis.

The event provided a unique platform to highlight the incredible efforts of the United Nations, specifically Baroness Amos and OCHA.  The attendees left engaged and motivated to find ways to contribute to the mission.

To view some photos from the event please visit our Facebook Page.