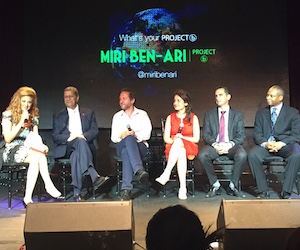 New York, August 27th: Grammy Award-winning violinist and UN Goodwill Ambassador, Miri Ben-Ari, launched a special and new project titled “PROJECT b” at the Highline Ballroom in New York City. Beyond just a live show, PROJECT b aims to raise awareness about many global challenges, the United Nations Sustainable Development Goals—as well as inspire people to move toward real, sustainable change. To that end, PROJECT b is a multimedia experience, combining audio, visual, dance, and music elements to connect and inspire the younger generations to move toward sustainable development.  The audience was blown away by the talent and grace of Ms. Ben-Ari.

Mr. Amir Dossal, Chairman, Global Partnerships Forum, was honored to moderate the post-concert panel, noting that the timing of the launch was perfect, as the United Nations gears up to adopt the Sustainable Development Goals during the UN General Assembly meetings in late September. He further highlighted that PROJECT b is just another of Ms. Ben-Ari’s commitments to supporting economic and social causes, and that the launch could be the start of more Calls to Action by the creative community.  He ended by stating that this is both “a time for celebration” and “a time for action”.