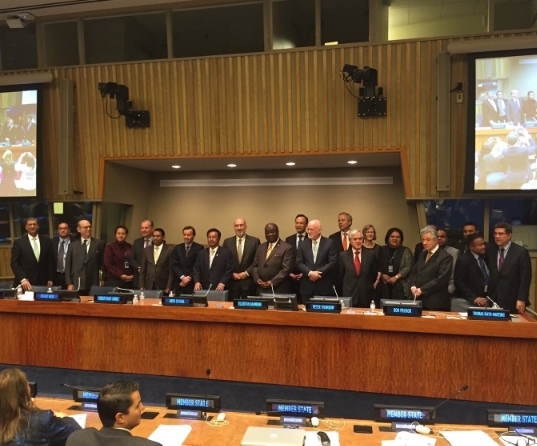 New York 5 March 2015: Braving a blizzard, 150 scientists, diplomats, and interested citizens attended a symposium at the United Nations on March 5, One Ocean:  Achieving Sustainability through Sanctuaries

They heard a strong call for action by the United Nations from the President Palau, with support from representatives of scores of member-states, ranging from the island states of the Pacific to the European Union.

Palau President Remengesau called for consensus that scientists need to be empowered in order for a global sanctuary network to be devised.  A traditional political approach, he said, will fail.  He urged as soon as possible the establishment of a scientific body with representatives from every region in the world under UN auspices to set the course and invited those scientists to use Palau, one of the most pristine areas in the world, as a laboratory and a baseline for the effort.

Diplomats of many countries from many regions of the globe who spoke at the event expressed support for keeping ocean issues high on the global agenda and adopting a strong Ocean Sustainable Development Goal this year.

World renowned marine scientists from China, Argentina, Israel, the UK and the US  provided vivid evidence that ocean sanctuaries can heal the ocean.

To view the illustrated report and the full programme, please click here.