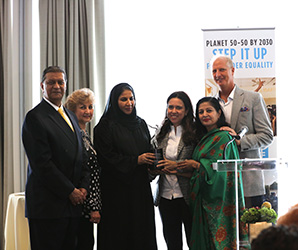 New York, September 20, 2017: UN Women and the Global Partnerships Forum (GPF) hosted a High-Level Event during the 72st session of the United Nations General Assembly, to celebrate Women Leaders in public office for their pioneering work in achieving gender equality and women’s empowerment around the globe, and their impact on the 2030 Agenda for Sustainable Development.

Recipients were presented the Agent of Change Award, which was created by renowned artist Spar Street for the Global Partnerships Forum, to recognize Champions of Gender Equality and Women’s Empowerment, in support of UN Women.

The event was emceed by the amazing Ms. Rachel Cohen Gerrol, Co-Founder and Global Curator of Nexus.  The Deputy Executive Director and UN Assistant Secretary General of UN Women, Mrs. Lakshmi Puri, delivered the keynote address, highlighting the achievements of the awardees for their exceptional leadership in addressing the gender imbalances in society “Our awardees today are eminent women who have broken glass ceilings, have pushed the frontiers of women’s leadership and have paved the path for other women and girls to follow in their footsteps and become future leaders.”

Her Excellency Madame Margot Wallström, Minister of Foreign Affairs and Deputy Prime Minister of Sweden, said “by highlighting the linkage between women, peace, and security, we can insure that the international community consider the important role women can play in peace building and conflict prevention.”

The Agent of Change award for Her Highness Sheikha Fatima bint Mubarak  was accepted by H.E. Ms. Lana Nusseibeh, Permanent Representative of the United Arab Emirates to the United Nations and H.E. Ms. Noura Khalifa Al Suwaidi, Director-General, General Women's Union of the UAE.  Ambassador Nusseibeh thanked UN Women and Global Partnerships Forum for recognizing UAE’s dedication to gender equality and empowering women, stating “The UAE prides itself on providing women and men with equal opportunities to excel across all sectors, and to contribute to our nation’s development and progress.  Her Highness’ mission has been to empower women throughout society.”  She also recognized the leadership role of Her Excellency Dr. Mouza Al Shehhi, Director of the UN Women Liaison Office, who will be instrumental in pushing this agenda forward.

H.E. Ms. Rym Al Falasy - Secretary-General, Supreme Council for Motherhood and Childhood, UAE, conveyed a message of appreciation for the special honor bestowed on Her Highness Sheikha Fatima bint Mubarak.  She highlighted the UAE’s commitment to gender issues, including its pledge to increase the number of senior women in public service.

Ms. Betty Liu, Founder and CEO of Radiate and Bloomberg TV anchor, shared her vision on how women can become influential change-makers, by benefitting from concrete leadership guidance.

Ms. Yue-Sai Kan, Emmy-winning TV host and producer, as well as a cosmetic entrepreneur, inspired women worldwide to be appreciative of their body image.

Mrs. Puri stated: “I would like to start by thanking our hosts Mr. Amir Dossal, President of the Global Partnership Forum and his wife Tas Dossal, for bringing us together to celebrate a constellation of women leaders from around the world in this award ceremony which aims at giving a big push for women to be granted equal and full voice, participation and leadership everywhere and in every aspect and for making the case that we need the essential role of women of courage, ingenuity, vision and achievement to realize humanity's noblest and vital projects of sustainable development and peace and security.”

Mr. Amir Dossal, President and CEO, Global Partnerships Forum, emphasized the importance of this unique platform to recognize global leaders, and thanked the participants, which included leaders from government, business, civil society, philanthropy, and change-makers, for their innovative work to empower women.

Mr. Dossal further stated, “We thank our good friend, Spar Street for especially producing such a beautiful design, and more beautiful is what it stands for:

The Agent of Change is that part of us that deeply wants to make a difference in this world, to uplift our own lives in a way that inspires others to recognize their greatness and do wonderful things. It is the allowing of heaven to move through us unimpeded, so that we can be of service and leave the world in a better place.”

Special acknowledgement to Dr. Ali Mazzara for her untiring support in overseeing the event.

To view photos of the event, please visit: https://www.facebook.com/PartnershipsOrg